“To Be a blessing to others.”

“Giving is an act of Grace.”

2 Corinthians 8 – Moreover, brethren, we make known to you the grace of God bestowed on the churches of Macedonia: that in a great trial of affliction the abundance of their joy and their deep poverty abounded in the riches of their liberality. For I bear witness that according to their ability, yes, and beyond their ability, they were freely willing, imploring us with much urgency that we would receive the gift and the fellowship of the ministering to the saints. And not only as we had hoped, but they first gave themselves to the Lord, and then to us by the will of God. So we urged Titus, that as he had begun, so he would also complete this grace in you as well. But as you abound in everything—in faith, in speech, in knowledge, in all diligence, and in your love for us—see that you abound in this grace also.

I speak not by commandment, but I am testing the sincerity of your love by the diligence of others. For you know the grace of our Lord Jesus Christ, that though He was rich, yet for your sakes He became poor, that you through His poverty might become rich.

And in this I give advice: It is to your advantage not only to be doing what you began and were desiring to do a year ago; but now you also must complete the doing of it; that as there was a readiness to desire it, so there also may be a completion out of what you have. For if there is first a willing mind, it is accepted according to what one has, and not according to what he does not have.

For I do not mean that others should be eased and you burdened; but by an equality, that now at this time your abundance may supply their lack, that their abundance also may supply your lack—that there may be equality. As it is written, “He who gathered much had nothing left over, and he who gathered little had no lack.”

Collection for the Judean Saints

But thanks be to God who puts the same earnest care for you into the heart of Titus. For he not only accepted the exhortation, but being more diligent, he went to you of his own accord. And we have sent with him the brother whose praise is in the gospel throughout all the churches, and not only that, but who was also chosen by the churches to travel with us with this gift, which is administered by us to the glory of the Lord Himself and to show your ready mind, avoiding this: that anyone should blame us in this lavish gift which is administered by us— providing honorable things, not only in the sight of the Lord, but also in the sight of men.

And we have sent with them our brother whom we have often proved diligent in many things, but now much more diligent, because of the great confidence which we have in you. If anyone inquires about Titus, he is my partner and fellow worker concerning you. Or if our brethren are inquired about, they are messengers of the churches, the glory of Christ. Therefore show to them, and before the churches, the proof of your love and of our boasting on your behalf.

2 Corinthians 9 – Now concerning the ministering to the saints, it is superfluous for me to write to you; for I know your willingness, about which I boast of you to the Macedonians, that Achaia was ready a year ago; and your zeal has stirred up the majority. Yet I have sent the brethren, lest our boasting of you should be in vain in this respect, that, as I said, you may be ready; lest if some Macedonians come with me and find you unprepared, we (not to mention you!) should be ashamed of this confident boasting. Therefore I thought it necessary to exhort the brethren to go to you ahead of time, and prepare your generous gift beforehand, which you had previously promised, that it may be ready as a matter of generosity and not as a grudging obligation.

But this I say: He who sows sparingly will also reap sparingly, and he who sows bountifully will also reap bountifully. So let each one give as he purposes in his heart, not grudgingly or of necessity; for God loves a cheerful giver. And God is able to make all grace abound toward you, that you, always having all sufficiency in all things, may have an abundance for every good work. As it is written:

“He has dispersed abroad,
He has given to the poor;
His righteousness endures forever.”

Now may He who supplies seed to the sower, and bread for food, supply and multiply the seed you have sown and increase the fruits of your righteousness, while you are enriched in everything for all liberality, which causes thanksgiving through us to God. For the administration of this service not only supplies the needs of the saints, but also is abounding through many thanksgivings to God, while, through the proof of this ministry, they glorify God for the obedience of your confession to the gospel of Christ, and for your liberal sharing with them and all men, and by their prayer for you, who long for you because of the exceeding grace of God in you. Thanks be to God for His indescribable gift! 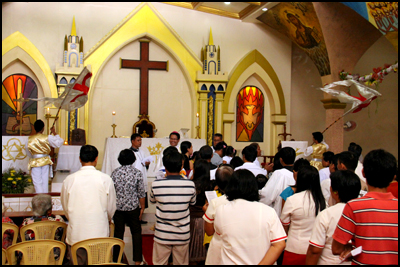